The propaganda media (NY Times, et al) finally reported on the Trump boat parades yesterday after 4 sank in rough waters in Texas. They sank due to taking on water in very rough waters. 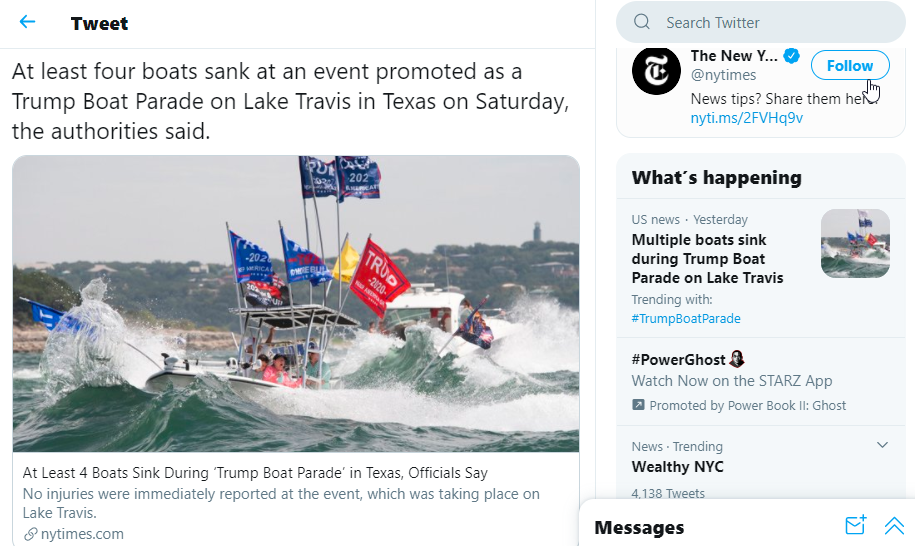 The sinking of the boats is now trending on Twitter for 2 days, with the Deep State Dems making fun of the Trump boaters, and drawing metaphors that it was a #BlueWave (also trending) that sank them.

But these Trump boat parades in themselves are the biggest news story of the day — each of these many boat parades that are taking place across the nation every weekend.

Importance: It shows Trump has MASSIVE support. Biden can’t get 50 people to show up for him who aren’t paid. Yet the fake polls were showing Biden with a big lead in the polls that has ‘recently narrowed’. Goal: when the Deep State Dems rig the election with the mail-in’s they can point to the polls and say “SEE!”

The Woodstock of Our Era

Coronavirus caused the Trump rallies to be cancelled. The Trump rallies were like the Woodstock of our era — thousands of people of all races getting together in grass roots fashion — to be in harmony; anti war; and take back the country from the globalists.

Some have surmised one of several reasons why the man-made Coronavirus was inflicted on the world was to end the Trump rallies, and get the French Yellow Vests and the Brexit and the Italian protesters and the Lebanese back in their homes as well. Other reasons: crush the economy, and then necessitate a mail-in vote where the election was ripe to be rigged.

The Trump boat parades grew beautifully out of a need for people to show their support and get around Coronavirus restrictions. You can’t tell people to not conjugate or wear a mask on their own boat. And BAM a new Woodstock was born.

Here are the boat parades reported by citizen journalists — this list is being added to from the top, as they continue:

With the weather turning October cold, the Trump Boat Parades detailed below have been replaced with Car Parades and other get togethers. Such as..

30,000 people showed up for the Latino’s for Trump parade today

We are Growing in Numbers & Power! ♥️ pic.twitter.com/yOA9gFxT0r

versus a typical Biden rally:

.@JoeBiden and @KamalaHarris bus came through Yuma! So many supporters excited to finally be able to cast their vote for #BidenHarris pic.twitter.com/Bb6eRSUalM

You know shit just got real when the Amish start a Parade https://t.co/QCYgR9pTEb

“The police dept, based on their observation in person, and on the highway cameras, combined with the formulas of roadway occupancy, have estimated 16-20 thousand vehicles for the TRUMP PARADE CINCINNATI OHIO.” #MAGA🇺🇸🦅

On the Potomac, Washington DC:

Reports of over 2,000 boats at North Carolina #TrumpBoatParade in Topsail Island! 🇺🇸⛵️pic.twitter.com/lN2afMiN7d

Even in little lakes in Sacramento California:

California will be turning RED IN 2020!!pic.twitter.com/MOJGFHF2aj

Check out this HUGE Trump boat parade on Sandusky Bay in Ohio! 🛥🇺🇸

Trump supporters all over who don’t own a boat are expressing their longing to join a Trump Boat Parade. Last weekend there was a Trump Golf Cart Parade!!!

And let’s not forget the Trump Car parades — like the one that assembled to Take Back Portland last weekend:

I'm out in the Portland suburbs, where hundreds of Trump supporters are gathering for an event. They say they will be driving into Portland later tonight. pic.twitter.com/NUHy5e4TnP

And the great people of Europe who got together last weekend for MASSIVE protests in London and Berlin to protest the bogus extended lockdowns:

Anti lockdown protest in London as well ..always hearing there is one in Denmark..

A small lake in Tyler Texas:

“Small town, showing their support for the greatest President.” pic.twitter.com/c6rrQyYtqt

Trump Boat Parade in the Finger Lakes of NY this morning! 🇺🇸⛵️pic.twitter.com/J79BfVcHSd

Maybe this is why Slow Joe doesn’t want to come out of the basement? pic.twitter.com/yyZu60vu71

TRUMP WILL WIN IN A LANDSLIDE! These Boat Parades are Indicative Of What I’m saying! pic.twitter.com/URi1J3zKLZ

I’d give anything to be in one Trump boat parade.

It looks so epically fun.

WATCH: Trump supporters in Clearwater, FL try to break a world record with a massive boat parade for President Trump!

Where are Biden’s supporters and what are they doing this weekend to rally for Joe? pic.twitter.com/aFfKOSixhF

The best youtube channels for war history storytelling are: Montemayor Montemayor does a wonderful job with the very basic graphical concept of using arrows and simple rectangles to show ship movements. His channel is here: https://www.youtube.com/channel/UCX7katl3DVmch4D7LSvqbVQ/videos […]

My Robin Trower Back Story I was working in the Queensboro Public Library, Forest Hills Branch (Queens, NYC) in the summer of 1980 in a college summer job I landed with the NYC government. It […]