Since 1998, Paperbacknovel.com has been a resting spot for book reviews, music reviews, news about town (especially NYC), and stories — because everyone has a story; actually many stories. 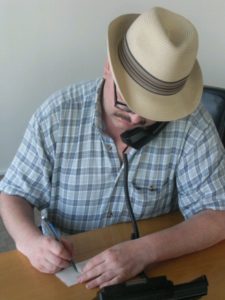 Used to talk to himself in shower a lot before forming the paperbacknovel set of sites, and before the advent of Twitter. BS degree in Engineering and a Masters in Journalism. Former Shelter Survey Technician for FEMA, surveying “public and commercial buildings for their applicability as Fallout Shelters in case of a natural or ‘man made’ disaster”. Was once thrown out of “Save the River” office by Abbie Hoffman (who ps was a great guy) attempting to survey his building for Fallout Shelter status. Mike Bloomberg once made a joke at his expense on Staten Island Ferry, saying out loud “He’s the only one working” as Lou cordially waved off his handshake as he was too busy on his laptop. In pursuit of truth, justice, and the other side of the story.

What Really Happened to Richard Nixon

Richard Nixon ended the Vietnam War. Richard Nixon was brought down by the Washington Post, and Deep Throat. Sound familiar? The last 6 years have turned a lot of heads as to the authenticity of […]

La Femme is a psychedelic surf-guitar-dance-music band out of France that JUMPED on the music scene in 2013, with their phenomenal first album — Psycho Tropical Berlin. In short order they became the hottest band […]

The Canadian Trucker Freedom Protest has been an event of the century — fed up with forced vaccine mandates to cross the US-Canadian border, Canadian truckers began a freedom convoy to Ottawa. From there things […]