If the world turned into a Twilight Zone episode tomorrow and storefront dummies became real overnight, I’d be heading over to Macy’s in a flash, with maybe a stop at Extaza on the way over. You may have never heard of Extaza’s — they are a small Mall store with a skimpy selection of skimpy things for the ladies, and very beautiful, life-like dummies. But since they are hardly known, I’d be gambling to say they’ll still be in business tomorrow, which factored into the selection of Paperbacknovel.com’s first annual Prettiest Dummies in the World award going to the Macy’s gals. Precisely the gals in the American Rag department of that store.

Even if the world didn’t turn into a Twilight Zone episode, you might be likely to mistake one of the American Rag Macy’s gals for a real-life, very-pretty lady at a quick glance. You’d do a double take and then you’d realize, ‘oh, she’s a dummy’. And that’s not meant to be a derogatory statement one way or the other. 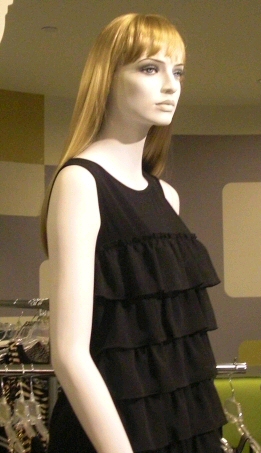 There are probably real-life women who don’t take their boyfriends to the American Rag department of Macy’s just so that they don’t have to compete with these ladies. The tag-along and wearied boyfriend wouldn’t be able to help comparing his girlfriend to the dummy. “My she wears those jeans so well; looks so slim in that dress.”

Dummies don’t eat, so they don’t gain weight. They don’t have to exercise; they are born blessed with perfect proportions.

And they don’t ask for much. You don’t have to take them shopping. No commitments.

Of course you wouldn’t know any of this until the clock struck midnight. Could be the Macy’s gals come with the same complexities of real-life women. Maybe they worry about their complexions, their hair, the clothes that they have on, and how they look compared to the other dummies in the department. And perhaps they’re judging me as I walk past. 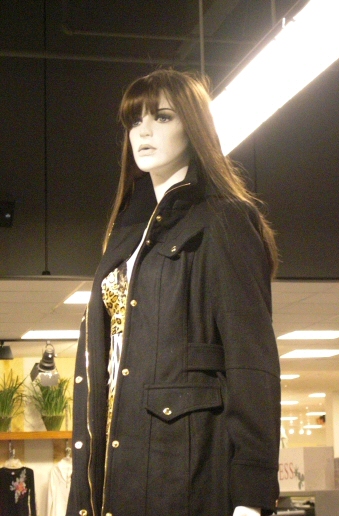 Maybe they’re planning their careers, dealing with the difficulties of finding the right guy to have children with, or using their creative talents to leave a lasting impression in this world.

For not all dummies, not even Macy’s dummies, are cut from the same cloth. The gals in the Nine West department don’t seem life-like at all; rather some abstract evocation of a sado-masochistic scene, with masks and corsets binding their frame.

And where are their arms? Tied behind their backs? Perhaps Macy’s is trying to subliminally and subtly tie high-heeled leather boots to eroticism, while looking the other way with a cheshire smile. Or perhaps it is all in my head but I have to say that there are no other dummies anything like the Nine West gals in any other Macy’s department or other Mall store.

You can form your own opinion — I can bet you that the ladies in the American Rag department have formed theirs — but not being into this scene we didn’t rate the Nine West’ers too highly in our survey.

And then there are the gals at Extaza. I’m not exactly sure what Extaza sells, but on quick glance it looked like a minimal selection of minimal things, with lots of For Sale signs. 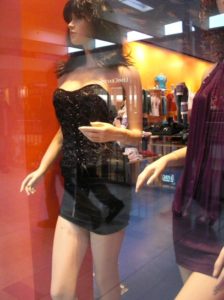 It wasn’t the kind of place a guy could walk into with even the slightest pretense of just buying something for the wife or girlfriend, even at Christmas time. But one thing’s for sure — the gals are double-take gorgeous and very life-like, and wearing some very skimpy things. Heck, I even felt like a lecher sneaking a picture of these gals from outside the storefront window for this article.

If the clock hit midnight, based on the way the gals in Extaza are dressed, I might not make it to Macy’s until the morning after. 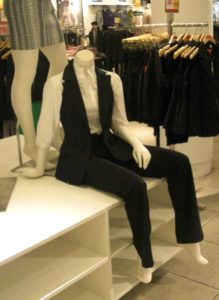 The dummies in New York Co. are very sophisticated, but they have no head. This is not to imply they lose their cool under pressure, or are stupid dummies. They simply have no head, and that makes it difficult to entertain any ideas of a relationship or intimacy. Even if you’re a fan of a particular part of a gal’s anatomy, a gal without a head just doesn’t make it. Oddly enough, the

gals in New York Co. have feet, but they are always barefoot. As sophisticated as they seem, the barefoot appearance gives them a casual look. 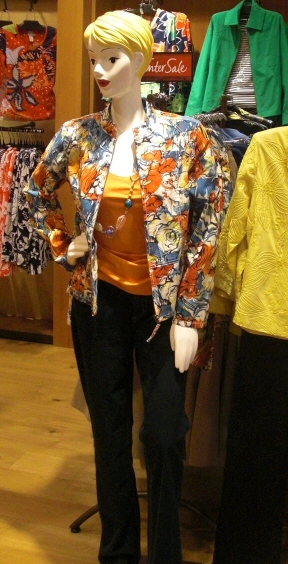 If you’d like to date Betty from the Flintstones, go to Chico’s. Cartoon characters come to life, but you really have to suspend your disbelief to fall for one of these women.

My first crush was on Wendy from the Casper cartoons, and Betty followed a few years afterwards. If I was still 3 to 5 years old, Chico’s would be my favorite store. These are gals you’d expect to see in the Disney store; but the oddity is that Chico’s is a store that seems targeted toward the mature woman; the over 50 set. That set of ladies typically doesn’t have a 3-year-old running about, so the dummies aren’t there to placate the kid; get him to stay in the store for a longer time because he’s got a crush on one of the dummies. Perhaps they’re there to brighten up the very bright clothes sold in the store.

In GUESS, it’s all about the bodies. And the bodies are tight.

But it’s not a place that you go to fall in love with a woman, because they also have no heads. Also many of the women I saw were already with some guy. 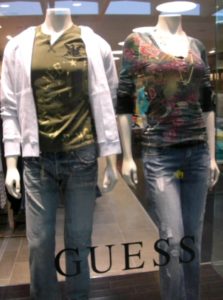 I have a gift card to GUESS that was given to me 5 years ago. It was originally for $200, and I’ve been able to spend almost $100 of that in 5 years — I remember picking out a shirt 4 years ago. The shirt was over $80. Even with outrageous prices like that (the jeans are also over $80), try as I might I’ve not been able to spend the other $108 on the gift card despite visiting the store every Christmas while shopping for other people. The clothes are strictly geared to 15-18 year olds, so that if you are over 40 like me, you’d look like a dummy wearing them.

Like the clothes, the gal dummies in this store seem to be about 15 to 18 years old, although I can’t be sure since like I say they have no head.

Ann Taylor is to the fashionable woman in her thirties or forties what GUESS is to the younger set. These gals have kept their bodies in great shape, but again, no head. Unlike the gals in New York Co., the Ann Taylor gals also have no feet, which allows pants to fall to the floor. They therefore look less casual; less relaxed, than the New York Co. ladies.

Ann Taylor could do with a change in their dummies — the business itself seems on the decline. They used to occupy a hotly-trafficked corner store in the local Mall, but they have this past year given up that ideal

spot and moved to a much smaller storefront in the middle of the mall. The place was empty, even in the days just before Christmas of 2008; the clothes high-priced and non-descript, much like the dummies. 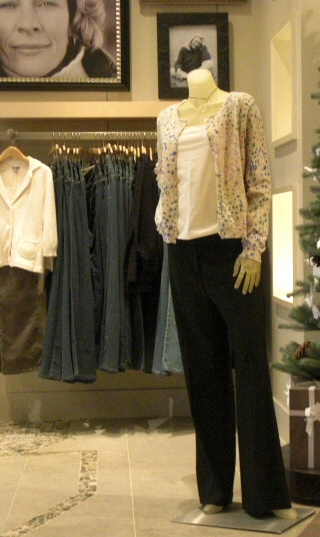 J. Jill competes with and beats Ann Taylor. They sell a more comfortable set of clothes. Fashionable yet relaxed. They have great sales, but if something isn’t on sale — watch out. The price can be quite stiff for a simple sweater. The pretty skimpy sweater in the picture to the right was $89, not on sale. It would be a good buy at $69.

The dummies wear their clothes well in J. Jill, and like the Ann Taylor gals, they keep themselves in terrific shape. But also — no heads. I am not sure who I would date — an Ann Taylor dummy or a J. Jill dummy. I am not a ‘foot’ guy, but the J. Jill ladies do have feet, so if you wanted to take romantic night strolls, a J. Jill dummy is the girl for you.

BCBSMAXRIA is the name of a store in the Mall. Swear to god. The chicks are really cool in this store. But they are like shadows on a dark city street in the night. Very mysterious. 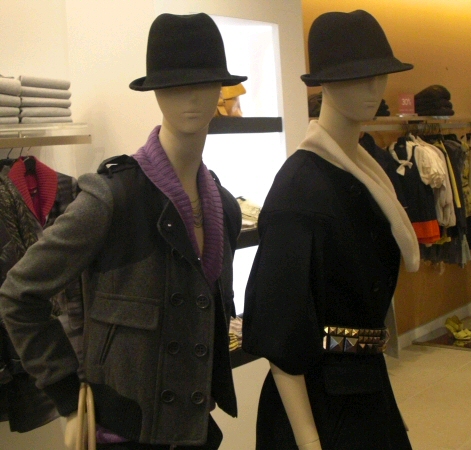 Which brings us back to Macy’s, and the American Rag gals. They can be playful, serious, smart, funny, complicated, stunningly beautiful, and very life-like. Every bit like real women. Thus our award for Prettiest Dummies in the World, 2008. I hope the other dummies don’t take this badly; they are all beautiful in their own unique way. And there is always next year. 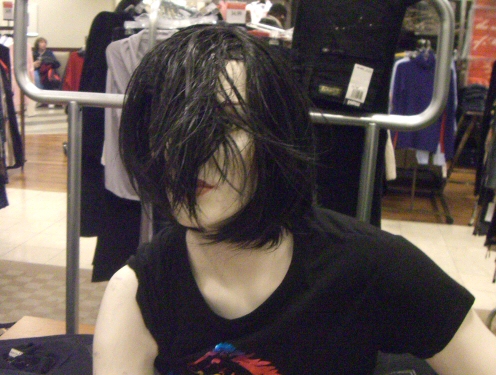 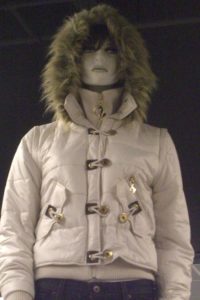