Who is Sheriff Joe Arpaio?

Main Stream Media Answer: he is the RACIST sheriff whom President Donald Trump gave his first Presidential pardon to, in August 2017 — showing how RACIST Donald Trump himself is.

Real Answer: he served as the 36th sheriff of Maricopa County, Arizona for 24 years, from 1993 to 2017. His biggest claim to fame is that he is a sheriff who had jurisdiction and launched a 5-year investigation (at the bequest of Tea Party leaders) that found President Barak Obama’s birth certificate to be false.

That factoid makes the story of Joe Arpaio more than a representative example of media bias. It is the definitive factoid that lays a NUCLEAR BOMB on the NY Times, Washington Post, CNN, ABC, NBC, CBS,  and all other mainstream media as well as product-differentiation ‘independent’ media such as Democracy Now, Pro Publica, or Politico — as Propaganda sources for the handful of people who run this world — the Global Cabal.

It lays them all to WASTE as sources that you cannot believe a word from. If they say X, then Y is the truth. Sending someone a ‘do-it-yourself’ article from the NY Times? They might as well be sending it from Pravda. “Look what Pravda has to say about this.”

The first I ever heard of Sheriff Joe Arpaio was on Dec 15, 2016 — two weeks after Donald Trump was elected President of the US — when someone on Twitter pointed to a news conference on a local tv news station in Arizona where a local sheriff and his team, including chief investigator Mike Zullo, were revealing the results of their 5-year investigation into the authenticity of the birth certificate that President Barack Obama had presented as his birth certificate.

I tuned in — that press conference is here:

Two months later, in February 2017, I came across a story on Twitter that Sheriff Joe Arpaio was facing JAIL time. Arpaio was accused to have violated a court order that found him to have been profiling Latinos and prohibiting him from further doing so. Violating the court order resulted in a charge of criminal contempt against him. The lawsuit of racial profiling — Melendres vs Arpaio — was originally filed in 2012, shortly after Arpaio began the investigation into Obama’s birth certificate in 2011. On July 31, 2017 U.S. District Judge Susan Bolton found Arpaio guilty; he would be facing 6 months’ jail time.

On August 25, 2017, Donald Trump granted sheriff Joe Arpaio his first Presidential pardon. The mainstream media, and Hollywood, and the music industry, and everyone with any influence went NUTS — denouncing Trump as a RACIST.

I happened to be in Starbucks the morning after the pardon — Saturday, August 26, 2017 — and read through the NY Times (that is strategically placed for free reading in all Starbucks across America). There were 4 articles off the home page that covered the pardon — all SMASHED Trump for being a racist — NONE mentioned at all the fact that Arpaio had found Obama’s birth certificate fraudulent.

In journalism, something so significant about the background of the person involved in the story HAS TO BE in the 1st or at least the 2nd paragraph of any news article about him. It is the Who, What, Why, Where, When, and Why of journalism.

The fact that the NY Times did not mention this fact AT ALL in ANY of their articles that day is a Nuclear BOMB on the legitimacy of the NY Times as a news source. It proves without shadow doubt that it is a propaganda medium. Nothing they write afterwards can be believed at all:

A litmus test; a representative example; all the evidence you need now and forevermore to know ALL the mainstream media is complete, 100 percent, propaganda. DON’T READ OR WATCH IT ANYMORE.

Run Your Own Test

Take your own test — google search “Sheriff Joe Arpaio” right now and read news articles about him from main stream media sources — see if they mention his finding Obama’s birth certificate false, which should be at the top of the article in reference to his background — who he is.

In the NY Times that morning, I saw another article, hidden below the fold, on how the Class Action lawsuit against the Democratic National Committee (DNC) for Fraud (the “DNC Fraud lawsuit”) was DISMISSED out of Federal court by an Obama-appointed judge. This despite the fact they had THOUSANDS of emails by John Podesta (the Chair of Hillary Clinton’s campaign) many that detailed how the DNC was going to pull the rug on Bernie Sanders and not allow him to win the primary vs Hillary Clinton.

This was the lawsuit brought by followers and fans of Bernie Sanders — based on those John Podesta emails that Seth Rich (manager of IT for the DNC) had reportedly provided Wikileaks; Seth Rich whom was then was shot dead with two bullets to the back weeks later on July 10, 2016.

This was the DNC Fraud lawsuit which Shawn Lucas had served the papers to DNC co-chair Debbie Wasserman Schultz in a video that went viral — Shawn Lucas who was found DEAD in his hotel room on August 2, 2016 — a month after this video was made — supposedly of a drug overdose.

The Federal Judge had conveniently picked this day, of the Trump pardon of Arpaio, to dismiss the lawsuit — on a Friday, with little coverage in the Saturday press.

What Did Bernie Sanders Have to Say?

And so thoughts swung to Bernie Sanders — what did he have to say about this? The class action DNC Fraud lawsuit launched by his fans for him — for which two people had DIED for him — dismissed out of court despite huge evidence?

I checked Bernie’s twitter account. He said … nothing about the DNC Fraud lawsuit. But he had plenty to say about how Trump was a RACIST for pardoning Sheriff Joe Arpaio. These are his tweets from that day and the next few days:

His actual tweets are here: 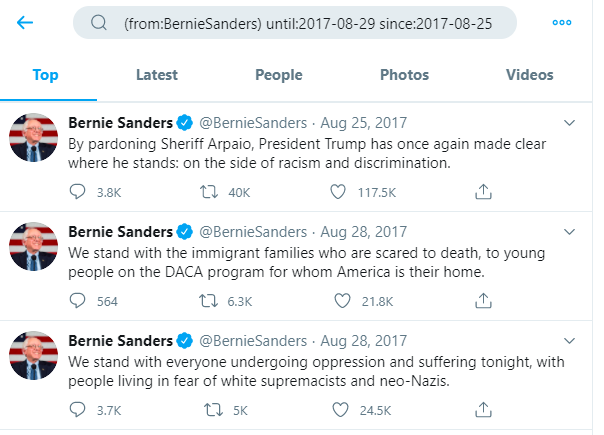 Horrible news yesterday: #DNCFraudLawsuit dismissed@SenSanders says NOTHING
Instead speaks on Arpaio but no mention of Obama Fake BC#Scary

They pulled the rug on Bernie Sanders again in 2020 — with Elizabeth Warren waiting until after Super Tuesday to pull out of the race, blocking Bernie Sanders who else wise would have won every state in a blowout — finagling to allow Joe Biden to gain the nomination — and Bernie kissed their ring again; not complaining — just moving off. Further proof that Bernie Sanders is simply Product Differentiation; a complete Fraud.

How amazing, the State Health Director who verified copies of Obama’s “birth certificate” died in plane crash today. All others lived

The propaganda media (NY Times, et al) finally reported on the Trump boat parades yesterday after 4 sank in rough waters in Texas. They sank due to taking on water in very rough waters. The […]

The Story of the Transistor, Silicon Valley, & Snuffy’s Steakhouse in Scotch Plains, NJ

I chose to pursue an Electrical Engineering degree because I was good in math and wanted to know what made my dad’s amplifier system work. He had a big music system, which I used all […]

Steve Marriott was one of the greatest figures in Rock History, yet is completely unknown to many rock fans — even fans who have spent their lives listening to Led Zeppelin, Pink Floyd, the DOORS, […]