Amidst the many videos going viral on Twitter from the Soros-backed, Purple Revolution rioting of June 2020 — one was of the looting of 5Art Gallery in Los Angeles. The 5Art Gallery specializes in Street Art — posing the question: when looters break in and steal Street Art — is it looting at all, or just more art? Street performance art.

Looters hit an art gallery on Melrose Avenue, LA. The street was previously hit two days ago. There's no end in sight to these peaceful protests. pic.twitter.com/mgRYCJLZLP

(the gallery has tracked down the people) pic.twitter.com/4l4fozkJ9T

5Art Gallery is run by French born Jean Jacques and Julie Darmon. The website is here:

According to the website, the gallery was opened in March 2018, and has featured works from renowned artists such as Banksy, KAWS, Invader, Takashi Murakami, and Jeff Koons. Some of the sculptures that you can see in the video being taken are “KAWS Star Wars Companions” and Hiro Ando‘s.

Sculptures Easy to Carry Not Paintings

Note that they took the sculptures and not the paintings. According to the website, they had Banksy paintings in a recent exhibit –not clear if they are still on exhibit. If they were, they were not taken. If they were, you could argue they should have been? Banksy is quoted on 5Art’s site as saying, “The art world is the biggest joke. It’s a rest home of the over privileged, the pretentious, and the weak.” 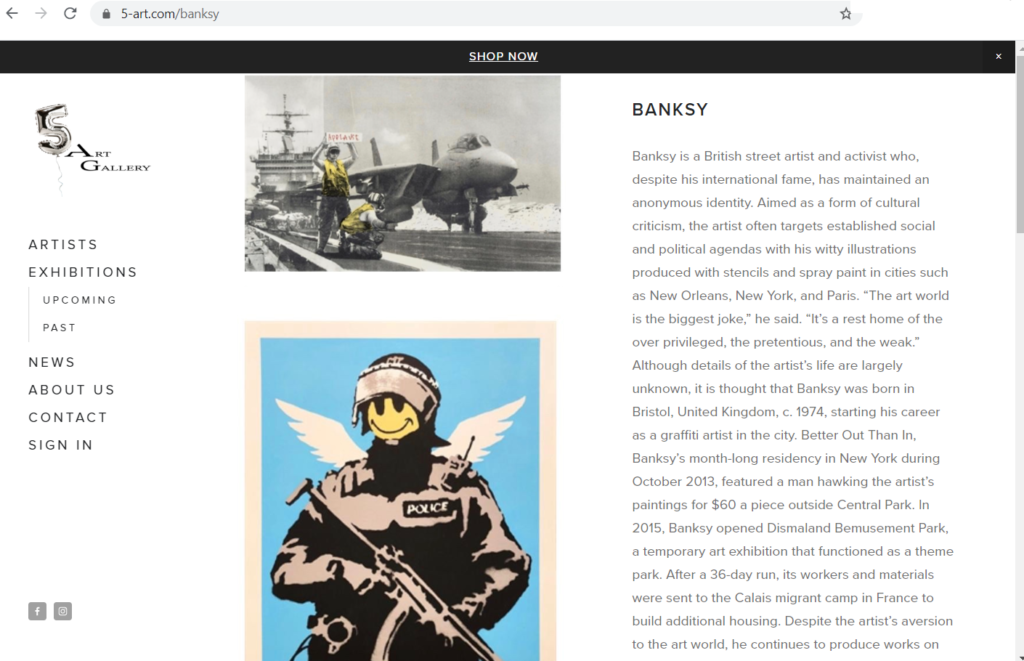 According to the website, they recently had a Jeff Koons exhibit, which are of course usually massive immovable sculptures, even if they had still been there — which they appear not to be from the video, unless there was a back room.

Our suggestion to Julie Darmon (who is on twitter @JulieDarmon but inactive) is to put up a tv screen on a pedestal in a corner that shows the video above on repeat — an art project in its own right. Performance Art of thievery of Street Art. The thieves themselves become artists, and part of the art.

If insurance pays for the stolen art, this possibly becomes good advertising for the owners. No one got hurt. But the thieves may have stepped in more than they bargained for and might want to get rid of the loot in short order — they have now become International Art Thieves — which may put them on an FBI list. Perhaps the FBI agents become part of the art project itself, as do all the tweets about the looting, as does this article?

Story of a Song: Etymology of ‘Marrakesh Express’ by CSN

Marrakesh Express is an amazing song melodically as well as lyrically — it tells a story of a journey to Marrakesh. It was written by Graham Nash, and was a big hit in 1969 for […]

The best youtube channels for war history storytelling are: Montemayor Montemayor does a wonderful job with the very basic graphical concept of using arrows and simple rectangles to show ship movements. His channel is here: https://www.youtube.com/channel/UCX7katl3DVmch4D7LSvqbVQ/videos […]