Madeline Patti is the greatest poet of all time. Period. If you don’t know who Madeline Patti is, she’s a woman I went to college with in the early 1980’s. Madeline Patti was mostly known as being extremely hot. We traveled in separate circles; I knew of her; certainly knew what she looked like; but had barely ever talked to her, if ever, until senior year. I was editor of the college newspaper, which meant I was the guy that got flooded with every forlorn, aspiring poet’s half-baked poetry that he or she wanted published in the college newspaper. It’s a funny thing about poetry.. seems like every 20-year-old guy who’s been dumped by his girlfriend, or has a new girlfriend, or wants a girlfriend, thinks he can write it. And the stuff written by 20-year-old gals is just as inane.

Most of the time I’d get shit that the person hadn’t even taken the energy to type out. It was generally written in bad handwriting on loose-leaf paper, that they’d rip out of their binder and submit. Or they’d come to me personally and show me their poetry, and start reading it to me.. and I was like, “as a rule, we do not publish poetry in the college newspaper.” Then they’d try to convince me why I should break the rule, not knowing it was me who set it up in the first place.

I set up the rule because I don’t believe in poetry. Very few of the stuff I’ve ever read is really good; most of the time it’s forced or just pretentious crap. And I’m not talking about the stuff submitted in college; I’m talking about the best of stuff from the all-time greatest poets. Robert Frost, Walt Whitman, Emily Dickenson, you name it. Most of it is forced bullshit by a bunch of pretentious idiots. I know this not because I search out and read poetry. Most of the time it’s been forced upon me. In college they make you read shit and then you’re supposed to figure out what the idiot was trying to say. My opinion — if you need to ‘get the answers’ then it’s bullshit. 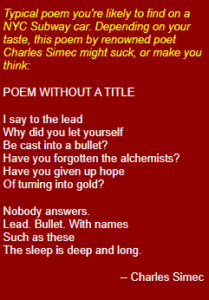 For people like me I think, the New York City Subway System instituted, 20 years ago, the Poetry in Motion program. If you’ve never ridden the NYC subway, every subway car has banner space that runs along both sides of the length of the car within which advertisements are placed. So if you’re sitting in the car, you look up and read the ads across from you. The length of the car provides room for about 20 some odd spots. Well the NYC Subway System figured they could use a spot or two in every car to publish a poem from a famous artist, to make everyone’s day a little brighter. Great and novel idea.

Except this program has done more to reinforce the fact that most poetry, even that written by one of the ‘masters’, is a bunch of crock. A person jots down a few sentences about their lover, and everyone else is supposed to read it and say ‘wow’. Bullshit. Good poetry is purely in the eye of the beholder. If it works for you, it’s good. It’s good for you… Doesn’t mean it’ll be good for someone else. Sylvia Plath should’ve gotten a day job and stopped feeling sorry for herself. By my same judgement, Jim Morrison’s poetry was head-and-shoulders above most of the crap I read in poetry classes in college.

So Madeline Patti and I happen to be in the college newspaper office alone together one fine day in our senior year in college. Now remember what I said about Madeline Patti being extremely hot. And so my thoughts weren’t about poetry when I inquired about what she had with her that day… I think she’d come into the office looking for some white-out to put the finishing touches on some work she was about to submit. She hesitatingly opened up her portfolio of poems and cautiously let me take a look.

And what I saw, blew me away. And I don’t remember the words, but I remember one in particular, where she wrote about the sharp blade of a knife that she was thinking about slicing her wrist with, and the blood that would pour forth, and the description of it was so real, I could feel the sharpness of the knife, feel the pain. And I got it, this was great fucking poetry. She was just using poetry as a medium to evoke a feeling — a thought — that a written composition would make too wordy. Whatever… It was good. That’s all I can tell you. It was good for me. I don’t know where Madeline Patti is today. If I knew, I’d tell her that her poetry is amongst the best stuff I’ve ever read. I want to see it on the running billboard of a subway car.

NOTE: This article originally appeared in the original layout of paperbacknovel.com in 1998 and is reprinted here. Back then we had a link to an article on the Poetry in Motion program by the long-defunct NY Press. That article is available on the Wayback machine here.