Crazy story: A friend of mine named Ray set me up to get free tickets to see Amici Forever in Brooklyn. After the show, my daughter and I stop into an eatery across the street, allowing her to do her current events homework. We choose an article in the NY Post at random – about the potential upcoming closing of CBGB’s. The next day on line in a music forum, I mention this to friends Ray, Johnny Treplow and others in passing, and it turns out Johnny is IN THE PHOTOGRAPH of the article! The picture was from 1977 ! We got the homework back from the teacher, and I’ve scanned it for you here. First, the whole article; below that is the picture with JT circled. 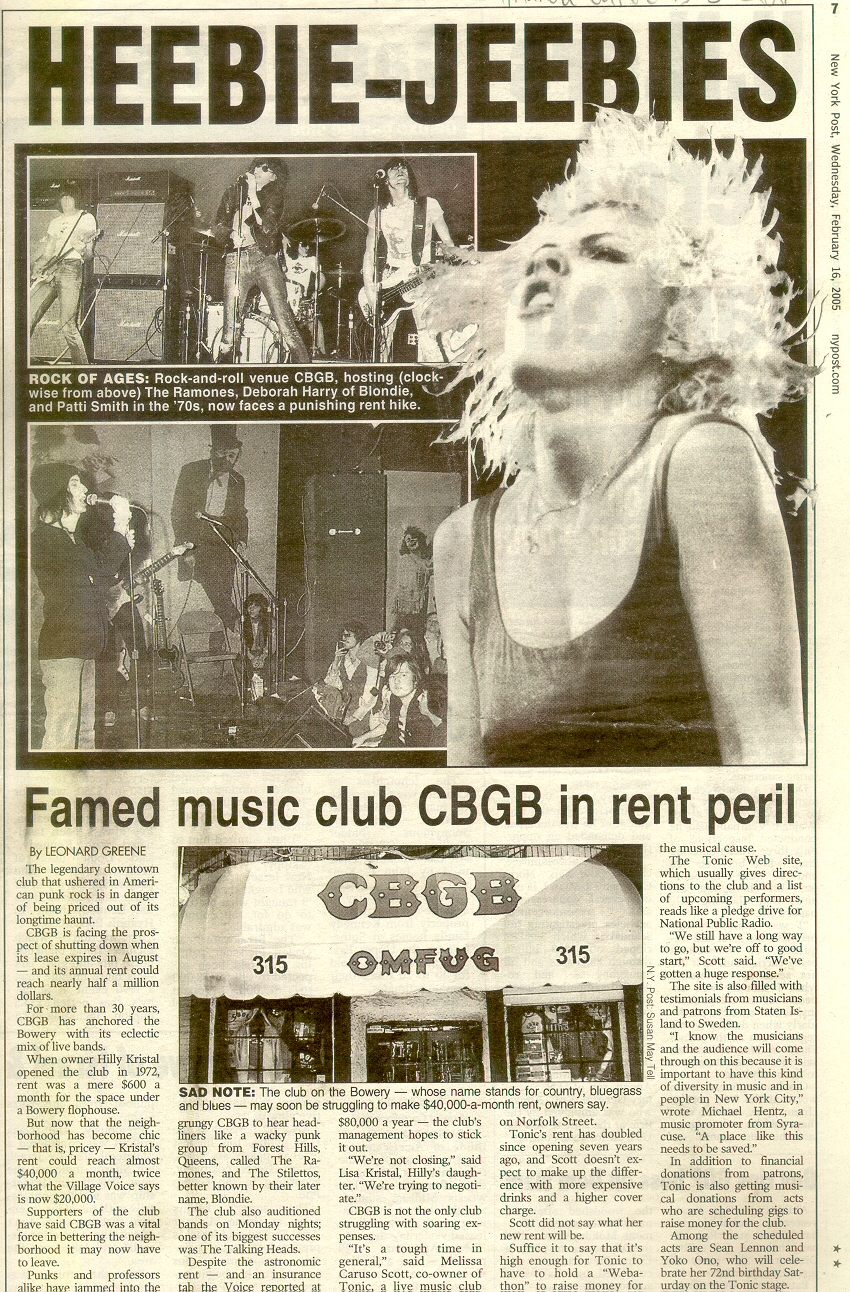 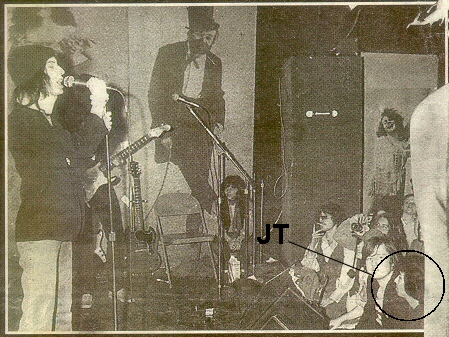 An Interview with JT

I asked JT to share the details of what was going on that night back in 1977, and here is what he said:

ahh, to be a teenager again – and be that thin with all that hair (sigh)…….

That was Easter Sunday, 1977 at CBGB’s. Patti released her second album, Radio Ethiopia, in late November 1976. She played five nights at the Bottom Line in Nov (I went to two shows — Bruce played guitar with her one night). In January 1977, she went on tour opening for Bob Seger. At a show in Florida, she was dancing near the front of the stage (during “Ain’t it Strange”), tripped over a monitor, and fell off the stage — breaking some vertebrae in her neck. She worked with a NYC sports doctor to help her recover and three months later, on Easter Sunday, she made her comeback at CBGB’s. The ad in the Village Voice promoted it as “La Resurrection”. The Dead Boys and The Damned each played a set before Patti came out. She said “I’m outta traction/back in action” and launched into a cover of The Velvet Underground’s “We’re Gonna Have a Real Good Time Together”.

I was right in front and my buddy is on the other side in the front (wearing glasses and smoking). Sitting on a stool on the side of the stage in the corner is Patti’s assistant, Andi Ostrowe.

Patti came on with a neck brace and the kind of cap that is in style these days…..

Another highlight was Patti’s cover of Hey Joe — which was the b-side of her first independent single in 1974; only time I’ve ever heard it done live.

Oh, and there was only ONE bathroom at GBGB’s back then — it was unisex.

I was far from cool — a naive kid from Long Island seeing a lot of things for the first time. I remember seeing Dee Dee Ramone screaming at some gal in the bathroom.

Saw some great shows: John Cale and Television used to open up for Patti. I saw Television many times before their first album came out. Saw them play 4 shows at CBGB’s (2 per night) the weekend that their debut album, Marquee Moon, was released. Tom Verlaine and Richard Loyd are great guitar players. I saw the Talking Heads when they were a three-person band (Pre-Jerry Harrison), The Ramones, Richard Hell and the Void-oids and Blondie several times. Debbie Harry and Patti did not care for one another.

I usually visited on the weekends. One night, William Burroughs was there and we spoke briefly. Paul Simon came to see Television play.

I’ll tell you what makes me feel old. In July of 1977, Patti played seven nights at CBGB’s. I went to all seven shows. Todd Rundgren was on the guest list for one of the shows. He arrived late, with a pregnant Bebe Buell. Lisa Kristal wouldn’t let them in because the place was way over capacity. I ran to tell Patti’s manager, Jane Friedman — and she escorted Todd and Bebe backstage. A few years ago, I realized that Bebe was pregnant with Liv Tyler at that time…….

It was a great education for me — both in terms of music and life.