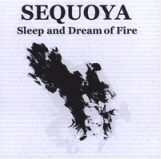 Sleep and Dream of Fire, released by Sequoya in September, 2008, vaults to select company as one of the best albums of the decade. It is great American folk music, sometimes hard driving, sometimes soft, but always melodic, thoughtful, and thought-provoking, with a haunting female lead vocal. Sleep and Dream of Fire is a theme-based album, mostly of space and its many metaphors. Sequoya is a singer/songwriting duo from North Carolina, with Bonnie on lead vocals and guitar, and Matthew on backing vocals and banjo. This is their third full-length album; sixth overall if you count EP’s; the previous albums were limited releases.

The music grabs you first, and you can listen to the music without paying attention to a single lyric, but those lyrics will gently sink in, and draw you in, and when you’re in, you realize the lyrics are quite fantastic, the subject matter unique, elevating this music to amongst the best stuff being made today.

The album kicks off with Rocket, an artfully crafted analogy of lover as rocket, who’s mind soars high into the atmosphere, and “can’t wait to get back in the sky” where she can “climb way back up above it all”, but when she gets too high, she inevitably falls to earth, “a flaming ball of unnamed fear”, and then washed up by the tide up on the shore – to the dismay of the scientists. And that is why, she sings, she longs to be in her lover’s arms and at peace. If you enjoy well-written, thought-provoking lyrics, the lyrics on this album will make you smile – the subject mater, the metaphors, the language stylings; all well done.

Playful Use of Language

My Father follows; a whimsically happy tune of a very sad tale – I picture Nemo traveling the ocean forever more, searching for his father but never finding him. Except in space, not the ocean, for the space metaphor continues — “When my father left for space I was not awake; and though I don’t know where he went, still I fancy him.” Poignantly, you might imagine a young child whose father left the home, and the child is left to think her father went off to outer space somewhere. This song was available for listening on Sequoya’s Reverb Nation page. For the album, they have upped the tempo and added a tin drum, making it almost a dance song – like what the British group DNA did to remix Suzanne Vega’s “Tom’s Diner”, except that Sequoya have done it to their own song. It’s a wonderful, danceable, naively happy song of sadness. “In my dreams you are the sun behind the thickest clouds”, sings the lead singer about her long-lost father. “Sometimes I’m my father and my father says to me, someday you’ll understand but I don’t understand.” There’s a playful use of language throughout.

Weary is the tale of a slave owner who wanted himself buried standing up on the grounds above his plantation so he could oversee his slaves working for the rest of time (it is explained in a podcast with Sequoya by Subdivision67). This song was written by Matthew, is driven home by electric guitar with distortion, and is sung beautifully by Bonnie as she weaves weariness into her voice, singing the final lines, “what have the winters made of you.”

Insofar, another favorite, is a hard-driving folk song with electric guitar and drums and Bonnie’s haunting voice penetrating the still night air, “don’t let the darkness scare you.” And then the scene flips (to the next morning?) and the happy plucking of the banjo introduces you to the acoustic Satellite. In general, the pacing of the songs on this album from one to another is superb.

It’s hard for me to pick my favorite song of the album; there are at least six or seven that vie for first place (with the others right behind). Satellite is one of them. Bonnie sings in first-person from the view of a satellite. “A mannequin you made me out of gears, wire, and chrome; ozone has melted through me I wish I was just flesh and bone.” Or is she making an analogy of herself as satellite around her lover? “I know I’m a satellite in orbit around you; I wasn’t supposed to break from the program you put through.” Or is she commenting on the human condition and its relationship to the earth? “We are only tiny specs in a glorified chain of events.” It is up to you to figure out, as you tap your feet to the music, with the crisp banjo playing by Matthew dueling with the vocals, and accentuating the music with an American folk touch.

This Time is a slow-tempo, pretty, reflective folk song that has you thinking of colored leaves on fall trees and the smell of burning wood in the air of the Adirondack or Appalachian or Shenandoah mountains, although the lyrics are nothing about that. Again, beautiful banjo work by Matthew.

On In Exit, the distinctive melodic style of lead singer Bonnie cross-sections a little bit into the sonic ground of Natalie Merchant, like the intersection of two overlapping circles, and for a few seconds, you think you thought you were listening to Til’ Tuesday Unplugged (one of the great live albums ever).

“Not all of us have definitions”, Bonnie taunts on How Closely. And this turns me around in my chair; first, I have always been one of those people who abhors the constant categorization of music (and other things). Second, in the systems architecture modeling field, a ‘definition’ is a term used for artifacts (systems, applications, databases) that are represented by ‘symbols’ on ‘diagrams’. Definitions carry information about a symbol; not every definition (for example, a business rule) is represented by a symbol; likewise, not all symbols have definitions. The separation of symbols and definitions has caused much stir in that field recently, by those who debate that symbols should not exist independently of definitions to enforce ‘model-based behavior’. Others debate that a symbol should exist separately from a definition, because it captures information about ‘instances’ of things which shouldn’t be captured globally in the definition. It’s as if Sequoya are happily singing from the viewpoint of a symbol in a design drawing tool. But I think they’re singing about something else.

The Other End of the Cosmonaut Periscope

The album closes with two more of my favorite songs – Cosmonaut’s Wife (which I’d heard on youtube a year prior to the album’s release, and which originally turned me on to Sequoya), and Barren the Sea, newly unveiled for this album. Cosmonaut’s Wife is the other end of the periscope of David Bowie’s Space Oddity. Bowie’s “Tell my wife I love her very much; she knows” is expounded by Bonnie – “she knows he’s up there, so far away; and the light she sees is from yesterday”. As beautiful musically and lyrically as this song is, for icing on the cake make sure to watch the video, handcrafted by Bonnie.

The song Barren the Sea is worth the price of the album by itself; it’s about the sailors who died on the Russian submarine Kursk, which sank in the Barents Sea in 2000, and weren’t rescued in time due to politics. The tempo rises with urgency “They could see their families waiting on the shoreline, praying ‘my god we’re running out of time,’” and then softens “bottom of the sea their breath like candles stop.” It will effect you; leave you there thinking about the sadness of it all, and you’ll put it on again. And again. Every song on this album is one that you’ll play over and over and over again. Buy it, and enjoy it.

Here is a link to the song, published on youtube by CD Baby:

Music Out of North Carolina: An Interview with Bonnie of Sequoya