And You Could Be Next, Even Taking Recommended Dosages

I took the recommended daily dosage of Tylenol for 4 and a half weeks in January of 2008, because of a sinus infection, and wrecked my liver. What I’d forgotten about was the little warning at the bottom of the label at the side of the bottle that says “Do not use for more than 10 days.”

I’ve been taking Tylenol for years, every time I get a sinus infection, which is typically once or twice a year. Like many people, I figured if it’s sold over the counter, it can’t be that dangerous. Not true – it is – really, really dangerous. We are at the tip of an asbestos-like iceberg of widespread bodily harm caused by a readily available product. And the makers of Tylenol — Johnson & Johnson’s subsidiary McNeil Consumer Products Co — know it; recently TV ads have appeared which essentially say, ‘your liver is important, only take Tylenol in recommended dosages’. Johnson & Johnson seems to be trying to be proactive to stem the coming storm.

My liver damage hasn’t caused need for a liver transplant, yet. Many, many other people haven’t been so lucky. Exceeding Tylenol’s daily recommended dosage has caused complete liver failure in young healthy people, in some cases after only a few days. Especially when combined with coffee or alcohol. And Tylenol isn’t the only drug brand causing this. 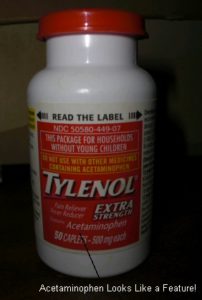 If you take any medicine containing acetaminophen for an extended period into the two-week timeframe, your liver is going to take a hit. How much damage you cause to it seems directly proportional to how long you take it, or how much of it you take in a short period of time, and will multiply if you throw coffee or a few alcoholic drinks into the mix.

According to a research study published in Hepatology magazine in December 2005 and covered by the NY Times, of 662 patients with acute liver failure at 23 transplant centers across the United States from 1998 to 2003 –- 51 percent were caused by acetaminophen poisoning. A NY Times article quoted Dr. Tim Davern, one of the authors of the study: “It’s extremely frustrating to see people come into the hospital who felt fine several days ago, but now need a new liver.”

Another study performed by researchers at the University of North Carolina and UCLA, and published in the July 5, 2006 edition of the Journal of the American Medical Association, found that Tylenol taken for four days as directed put patients at risk of liver damage and that healthy adults who took the maximum dose of Tylenol for two weeks were found to have liver damage.

According the the NY Times article, Dr. Charles Ganley, director of the F.D.A.’s Office of Nonprescription Products, said “Some companies have voluntarily added new warnings about acetaminophen’s risk to the liver, and they should be given credit for that.” Funny because I remember when the word Acetaminophen started appearing on the front of the Tylenol bottle several years ago, and I took it as an advertisement that Tylenol had the fantastic ingredient Acetaminophen, while other aspirins didn’t!! They blared it on the front of the bottle like a Feature.

There are numerous symptoms for liver damage; for me it was in the stools – not to get too graphic, but irritable bowels and clay-colored, unusually mushy stools. I’ve learned from internet research that bile salts from the liver break down and absorb fat. The natural dark color of stools comes almost exclusively from the bile. If the liver isn’t producing enough bile, you will get fatty stools that are clay (light brown) colored, and mushy. The stools will also be unusually smelly.

You can tell a lot about your health from your stools, yet not one doctor I visited (two gastroenterologists and an internist) ever asked me about their color or consistency. The first gastro sent me for a sonogram, which showed the size of the liver was fine. So he gave me a Xeroxed copy of a high protein diet and sent me on my way. 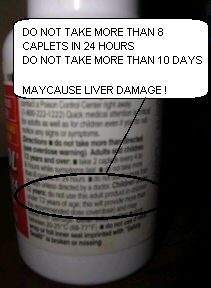 I happened to go to an internist for another problem — pins and needles in my fingers which turned out to be caused by a herniated disc in my C5-C6 area of my neck, which also was causing sinus pressure and caused me to take the Tylenol for over 4 weeks to begin with! (normally a sinus infection lasts two weeks.) As a matter of procedure, the internist sent me for blood work, and it showed very high Gamma-Glutamyl Transferase GGT level of 173 (normal is 2-65). GGT is used as a marker for liver damage. Tests retaken a month later revealed a lower but still way-high GGT of 143. A retake of tests two months later showed a GGT of 114. Still way over the norm, but the internist took it as a sign that the liver was gradually repairing itself. I’ve not touched any medicine with acetaminophen in it for over a year, and the color, consistency, and smell of the stools has gotten better.

There are other symptoms of liver damage – classic symptoms such as fatigue, yellowing of skin, itching, easy bruising – but you don’t have to have any of these to be sustaining damage.

For acetaminophen poisoning, in addition to stool changes, Medicinenet.com says that patients can experience nausea and vomiting (often confused with the sickness you are taking the medicine to cure). If the patient develops severe acid buildup in the blood, then kidney failure, bleeding disorders, and coma will lead to death if not treated by a liver transplant.

Maybe I escaped, maybe not. But the goal is to spread the word. I’m not calling an end to the selling of acetaminophen — it is a heck of a good drug to alleviate sinus headaches. But everyone must know how powerful and potentially life-alteringly damaging this drug is. I you are taking any of the medicines listed above, please go to the internet and look up the details. If you are taking these medicines, take them minimally, and DON’T drink alcohol and/or coffee while you are taking them! If you’ve got children, lesser dosages can cause liver damage.

Understand Your Health — Keep an Eye on Your Stools: http://www.emedicinehealth.com/stool_color_changes/article_em.htm#causes