My Robin Trower Back Story

I was working in the Queensboro Public Library, Forest Hills Branch (Queens, NYC) in the summer of 1980 in a college summer job I landed with the NYC government. It was a special technology job — dozens of us were assigned to the new computer systems that the Queensboro system had just installed — 5 of us to the Forest Hills branch — to scan books in and out of the library for the first time ever.

The job itself was simple, but we were assigned as technical gurus to help the librarians with this new technology. We were a mixed group who quickly became good friends — Tony a muscular 18-yr-old black kid from Queens who was into Jazz music; Rebecca a beautiful black gal from Queens, two Hasidic kids — Holly (pronounced Hkkolly) and Shaul, and me — a white kid from Staten Island. Tony and I especially became good friends but I haven’t seen him since 1982 — we were running up the down escalators at the bottom of one of the World Trade Centers. I do not remember his last name so can’t look him up.

It was a 2.5 hour commute for me each day — the train to the Staten Island Ferry to the 1 train to the F train out to Forest Hills. My parents thought I was nuts, but it was a tech job and paid well enough. (On the weekends I worked at a liquor store by the Staten Island Mall with a completely different cast and crew; story for another time.)

So we scanned the books in and out, working with the librarians — a wonderful mix of people themselves. And then there were other summer helpers — teenagers from the neighborhood who had simply gotten a job with the local library to stack books on the shelves.

It took over a month before we — the NYC endorsed tech wiz college kids — started hanging with the book stackers. One of the stackers was this quiet, skinny-as-heck girl with long super stringy hair — looked like 1970’s Peter Frampton.

The big thing back then was checking out records — the library had a record set of a few hundred albums available. I remember this girl — I forget her name — lighting up — which was surprising considering her very quiet personality — because an album had come into the collection by Robin Trower.

She was ecstatic and was going to be the first one to check it out — as she had inside dibs, working in the library.

She was a HUGE Robin Trower fan. I was a HUGE Jimmy Page Led Zeppelin fan (and the like, DOORS, Pink Floyd, etc) but had never heard of Trower. I thought he was some sort of second rate, possibly-up-and-coming guitarist but with a ceiling. I had little interest.

It took me 38 years to realize how ahead of her time that girl was; and what a GREAT taste in music she had. And how ignorant I was.

Because of course Robin Trower was the lead guitarist of one of my favorite songs at the time — Whiter Shade of Pale by Procol Harum, before he went out on his own.

Trower’s sound is phenomenal. His use of reverb will make you melt. It’s as if he took the reverb that Jimi Hendrix was doing — and drove down on it — took it to another place. Of course Trower was a contemporary of Hendrix — they both became famous at about the same time in 1967; maybe Hendrix was influenced by Trower and vice versa.

This is a terrific snippet from Trower’s current Wikipedia entry — I add it here in full:

“During a 1971 tour with Jethro Tull, Robin Trower arrived early for a sound check and found Martin Barre’s Fender Stratocaster (which Barre used for slide playing) propped up against an amplifier. Trower picked up the guitar, plugged it in, and with a shout that resounded around the auditorium he yelled, “This is it!” “I then switched to Strat” he says. “Up to then I had been playing Les Pauls.”

Trower’s most famous song as a solo artist is “Bridge of Sighs”; here’s a terrific live version from 1974, with Jimmy Dewar on vocals:

Here is a wonderful, relatively recent interview where Trower describes how he gets his sound:

Trower was with Procol Harum for their first 5 albums, thru 1971, then started a band called Jude, with singer Frankie Miller, Jimmy Dewar on bass, and ex-Jethro Tull drummer Clive Bunker.

The band dissolved in less than a year and Trower formed his own band under his own name in 1973, taking Jimmy Dewar with him as bass and lead vocal.

The Robin Trower band original drummer was Reg Isidore, who was later replaced by Bill Lordan.

Jimmy Dewar is one of the most underrated Blues singers of the 1970’s Rock scene. He is as good or better than anyone you can name — from Joe Cocker to Robert Plant to Tom Jones. TREMENDOUS FEELING to his voice.

I can’t describe it to give it justice; you just have to listen. He will MOVE you.

Jimmy — who was Scottish like Tom Jones — sadly died in 2002 of a stroke after years of disability resulting from a rare medical condition called CADASIL, which caused a series of strokes. That info is from Dewar’s wikipedia entry, which is scant.

As I write this article, Jimmy Dewar’s voice singing Bridge of Sighs is stuck in my head. A good feeling!

And so Robin Trower band recorded 24 (twenty four) albums over the next 47 years — the first 4, released between 1973 and 1976 by Chrysalis — went Gold. Those were Bridge of Sighs, For Earth Below, Long Misty Days, and In City of Dreams.

Trower then moved from Chrysalis to Atlantic Records, with whom he recorded two albums in the late 70’s, and then formed his own label, V-12 — under which he has recorded almost all his other albums — except for the last two, which he’s done for Provogue and Manhaton.

Those are the studio albums. There have been live albums as well — 10 of them. And then there have been compilations — 13 according to his Wikipedia entry.

Jesus Christ he’s been prolific! Hiding in plain site to those ignorant music fans like myself!

Trower at Winterland = One of Best Live Concerts Ever

If there is a better blues concert that has been recorded live with audio and video, than Robin Trower Live at Winterland in 1975 — I think it would be impossible and subject to subjectivity. It is a PHENOMENAL concert. Trower on guitar, with the reverb and his SOUND. Jimmy Dewar vocals. Bill Lordan drums.

And so the first thing you do as an ignorant music fan who realizes that Robin Trower is 76 and still touring regularly, is look up to see if you can catch him live. I did that last summer, only to find of course his US tour was cancelled due to COVID. 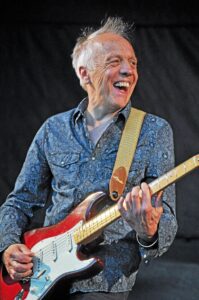 Also — according to Trower’s website, it says “In case you’ve been wondering when you can next see Robin in concert, we’re moving the next US tour to Spring 2022. Additionally, we will release the next CD, No More Worlds to Conquer, in the first quarter of 2022. Watch this space for details as they’re released.”

It appears that info needs to be corrected slightly, as Trower’s tour is now officially starting in Fall 2021 — you can buy tickets — and goes into 2022. I plan on buying tickets to see him in the NYC area. Can’t wait.

The music industry is a tough business. There are many artists that contribute a portfolio of terrific music and performances, and never climb out of the local music scene to the next level. Even if […]

By Dick “Scorpio” Laresch So the International Astronomical Union (IAU), a body comprised mostly of Euro-weenies – has “voted” Pluto off the planet roster. Oh yeah? How come I still think it’s a planet? Because […]